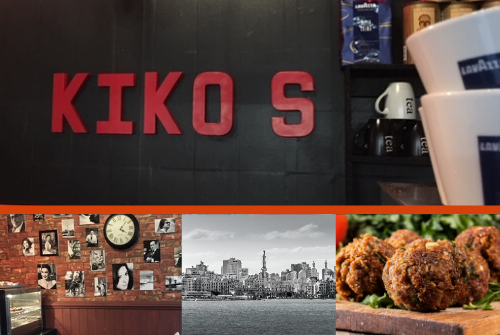 Plymouth Market’s latest food offering has truly international connections – there are already branches in Cairo and Alexandria in Egypt!

A little taste of Egypt in Plymouth Market

Owner Mohamed has brought a little bit of his native Egypt to Plymouth Market, opening up the third branch of Kiko’s to introduce Plymothians and visitors alike to the fresh, flavoursome tastes from the country of the pharaohs.

Specialising in wraps, Kiko’s offers a wide selection of meat-based, veggie and vegan options, all based on Mohamed’s grandmother’s traditional recipes, which have been handed down through his family and can now be enjoyed here in Plymouth Market.
Customers can choose wrap fillings such as falafel, aga (tomato, fresh herbs, onion and egg), chicken shawarma, halloumi and beef and lamb kofta as well as burgers, all served up with a fresh side salad. As they are all made fresh to order, they can be adapted to suit your taste, great news for vegans. Mohamed is also planning to add to the menu with more Egyptian and Middle Eastern-inspired dishes as he gets to know customers’ tastes and favourite flavours.

A great vibe at Kiko’s in Plymouth Market

Kiko’s is also a great place just to stop and enjoy a Lavazza coffee, tea or soft drink and a chat – it’s a cool venue with a modern urban feel; the walls are covered in black and white images of 20th and 21st century Egyptian legends such as actor Omar Shariff, Nobel prize winner Anwar El Sadat and Liverpool’s Mohamed Salah, along with key landmarks from Mohamed’s beloved home town of Alexandria.
Named after Mohamed’s youngest brother Kiko, a percentage of the eatery’s profits will go to a charity in Kiko’s memory. An even better reason to visit Kiko’s and enjoy some of the tasty treats on offer.