Farewell and good luck to The Bookstall 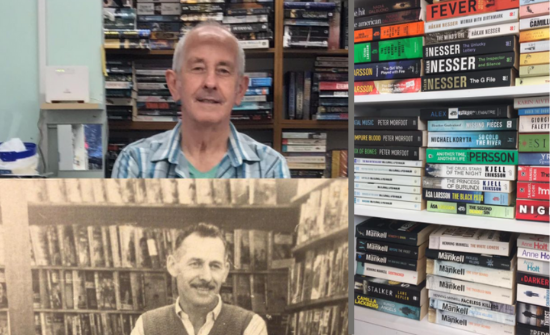 Marking the final chapter for the Bookstall in Plymouth Market

This Saturday marks the end of an era for Plymouth Market as the family behind The Bookstall – our longest standing stall – is set to retire.
The Bookstall, run by the Fielders, originally opened in 1957 in the old Pannier Market which was originally located roundabout where Boots is now.
Set up by Mr Fielder to make a few extra bob to support his family of five children, books were the one thing he had in quantity at home. So, after working nights on the railways he set up a book stall in the Pannier Market. At that time Plymouth had 13 independent book shops and two other book stalls – quite a difference from nowadays!

When the current market building opened in 1959, Mr Fielder moved in lock, stock and blockbuster! He ran the stall for 30 years before handing over to his son, Richard, in 1990 who retires this Halloween. Richard and wife Kathie had some help from their son Adam, who now runs AHF Workwear – the stall just opposite the Bookstall so you could say they’ve been keeping that part of the Market a real family affair.

Richard can remember the Market way back in 1959 and says that when it opened the New George Street side of the Market had a grand total of 22 fruit and veg stalls, who all bought their produce from the same Coxside fruit and veg market. Just think of the volume of people needed to sustain that – although of course back then there were no supermarkets, ready meals or shrink-wrapped packaging to keep everything fresh.
The make up of the Market was quite different in the 50s and 60s. Along with the 22 fruit and veg sellers, there were two or three bakers, a carpet stall, a crockery stall, along with butchers and fishmongers. Shopping was a weekly affair, which had to be mainly carried home on the bus.

What a difference 6o years makes in Plymouth Market

A far cry from the wonderful range of stalls, eateries and cafes that go to make up the Market now. You can still get your fish, fruit and veg, household goods and lots of other unique items but now you can reward yourself with a whole range of fresh cooked food offerings from traditional British fayre to Asian or Caribbean cuisine with everything in between too!

A big thank you to all the Bookstall’s customers

Whilst looking forward to some well-earned relaxation, the Fielders are going to miss their amazing customers once they’ve retired. They’ve made the years so enjoyable and helped the time to fly by. From locals to holidaymakers and those returning after moving away from Plymouth, the Fielders have built up a following of loyal customers; in fact, Kathie has become quite the agony aunt to many of them. Customers have also included famous local residents from Edward Woodward to many of the former TSW studio team (sadly not Gus Honeybun) as well as stars appearing at the Theatre Royal. The Fielders would like to say thank you to everyone.

Best wishes for a long and happy retirement

And the Market would like to say a big thank you to the Fielders and to wish them a very long and happy retirement. We hope that they now have the time to make the most of living close to the moors – enjoy your walking and gardening Richard and Kathie
The best of luck for the future